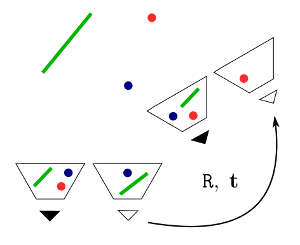 Stereo relative pose problem lies at the core of stereo visual odometry systems that are used in many applications. In this work we present two minimal solvers for the stereo relative pose. We specifically consider the case when a minimal set consists of three point or line features and each of them has three known projections on two stereo cameras. We validate the importance of this formulation for practical purposes in our experiments with motion estimation. We then present a complete classification of minimal cases with three point or line correspondences each having three projections, and present two new solvers that can handle all such cases. We demonstrate a considerable effect from the integration of the new solvers into a visual SLAM system.

This video shows how a proposed algorithm helps a SLAM system to recover from tracking failures due to fast motion on video sequences of a popular KITTI dataset: